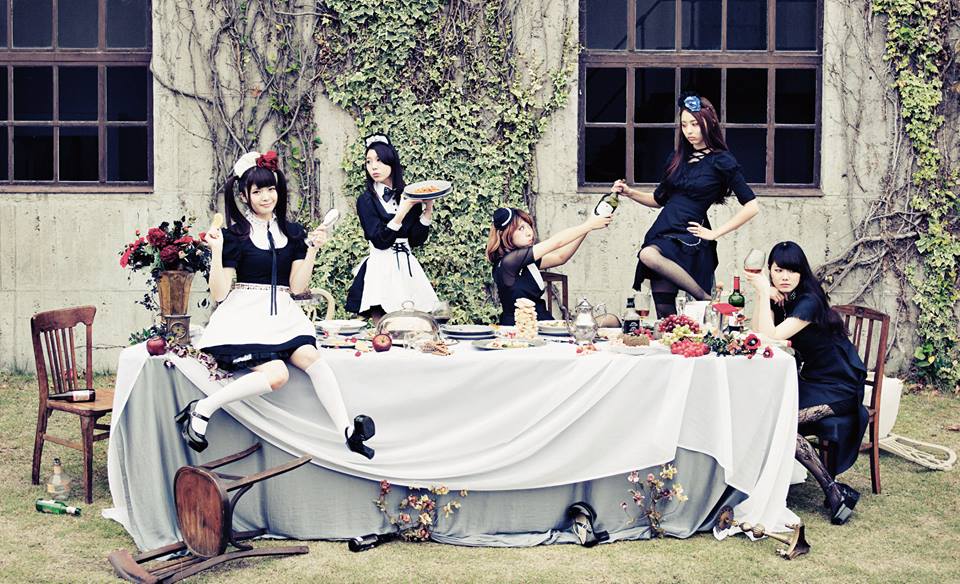 BAND-MAID (stylised as BAND-MAID®) is a five-piece, all-female Japanese rock group, signed to Gump Records (an imprint of the Shibuya-based Platinum Passport artist management and talent agency, itself a division of Avex Group). The group's image is modelled on the outfits worn by Tokyo's Maid Café hostesses. In interviews, the band explains the concept came from founding member Miku who had previously worked at the NOODOL Cafe in Akihabara.
Since their formation, BAND-MAID has regularly performed live at various venues around the Tokyo area. The group released their debut album "MAID IN JAPAN" in January 2014, written in collaboration with Platinum Passport-affiliated musicians Masahiko FUKUI and Kentaro AKUTSU  (the latter formerly also of musical group ZERO). 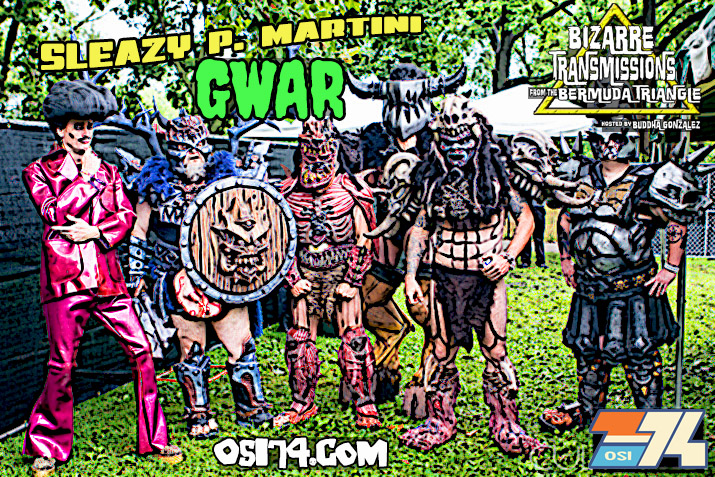 GWAR
It has been 29 years since the heavy metal holocaust known as GWAR burst upon our world in an explosion of blood, guts, and screaming steel. In this time they have revealed themselves not only as the un-disputed masters of “shock rock”, but also as an international cultural icon that has both touched the lives, and in some cases ruined the clothing, of many thousands of people. Often copied, never tamed, GWAR has set a standard of consistency in their work that is unmatched in rock and roll history. GWAR is currently supporting their 13th album, the incredible "Battle Maximus", and will continue in their non-stop tour schedule until the world is finally brought into groveling submission, and GWAR at last attains its glorious destiny, whatever that is.

For those of you who were just born, GWAR is a group of alien monsters who were banished to Earth millions of years ago as punishment for their cosmic crimes. GWAR was frozen in the wasteland of Antarctica, to wait for the cosmic summons that would herald their return to the stars. But fate intervened, and GWAR was de-thawed by global warming.

Led (poorly) by pig-nosed lead singer Oderus Urungus, they began wandering the world, where they were quickly discovered by music mogul and mob boss Sleazy P. Martini. Transformed into the ultimate heavy metal band, they set about the business of destroying the human race with this savage sound, throwing great “concerts” where thousands of humans would be lured to their deaths. But this commotion would not go un-noticed in the vastness of the cosmos, and soon GWAR was under attack from a huge variety of both super and not-so powered adversaries. A GWAR show will see slaughter wrought upon anything within sword’s reach as GWAR defends their blood-soaked crown of metallic opulence from the legions of the lame that would seek to sully such things, and deprive YOU of the sick fun you so desperately need, need to make existence in this diseased and miserable world somehow bearable, even with an axe through your skull.

In the latest chapter of their epic adventures, GWAR has released GWAR’s Battle Maximus, their most mind-melting musical masterpiece to date, an homage to the mighty Flattus Maximus as well as an introduction to our newest Scumdog, the shred-diculous Pustulus Maximus. Will GWAR "come-correct" and satisfy their legions of slaves that they have not gone "all soft", or will they nose dive into an over-sized tray of rotten deli-meat? Only one thing is for certain—GWAR rules!

​Sleazy P Martini
Sleazy P. Martini is a character played by Don Drakulich in the theatrical heavy metal band GWAR. He wears a gigantic gold necklace with a dollar symbol, a large pompadour, a bright purple suit, and is often seen wielding a sawed-off shotgun. In the GWAR mythos, Sleazy is GWAR's manager and the person that taught them to play their instruments.

Age: Thir...None of your business!
Date of Birth: 6/6/56
Home planet: Oith
Height: 6'6", plus 2 feet for hair
Weight: 150, plus 50 pounds for hair
Symbol: $
Eye color: Green, what else
Favorite color: Green, what else
Favorite T.V. show: The Peoples Court
Favorite movies: The Godfather, Meanstreets, Scarface
Favorite drink: Happy Time wine
Favorite food: KungFu malt liquor
Last book read: How to manipulate friends and intimidate people
Last book written: Ditto
Last raped orifice: The collective anus of the buying public
Favorite celebrity: Myself
When I get mad: I get even
Dream of goal: There is no number large enough to quantify that kind of money
Philosophy of life: It's a bitch for everyone else
Accomplishments: Fingering Cher
What shames me: Ditto
On dates I like to: Get sucked for 12 hours
Quote: "Suck it up" 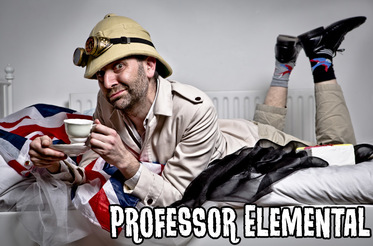 Professor Elemental has created a unique neo-Victorian blend of hip hop and comedy, and is the man behind the world’s first steampunk rap album. His music charts subjects such as steam-powered flight, underwater discovery, and nice cups of tea. With a heart of brass and a fine pith helmet, he embodies the Victorian spirit of invention and exploration. His act has gone like clockwork at Steampunk events and music festivals around the world including White Mischief, the Steampunk Worlds fair and The San Francisco Edwardian Ball. He was recently awarded Best Musical Act in the Brighton fringe as well as most Eccentric Englishman and most Eccentric artist.

The song was produced by Tom Caruana, with scratches by Dj Nick Maxwell and is (c) Paul Alborough and Tom Caruana

Video directed by The Moog

Huge Thanks to everyone who took part!

Particularly special shout outs to Brian Kessinger, the Nathanial Jonestone Band, Steampunk Boba Fett, Kato, Brute Force Studios, Sarah Hunter, Steam Powered Giraffe, Steampunk Green lantern and the Flash, The league of S.T.E.A.M, Shay Gilbert, Steampunk Abe Lincoln, Dianne Givens, Poplock Holmes, The lady who got bustle, Steampunk Wolverine, The staff of old Tucson, the volunteers at WWC and everybody else who was lovely enough to give up their time.

Steampunks, performers, organisers and venues- we are ALL IN TOGETHER and you all make the world a lovelier place with your presence.

To attend the next Wild West Convention head to: www.wwwc3.com/

To visit Old Tuscon pop along to: http://oldtucson.com/

For more from Tom Caruana, head over to www.teasearecords.net @tomcaruana

For more delightful videos from Moog, subscribe to iammoog @moog_peculiana 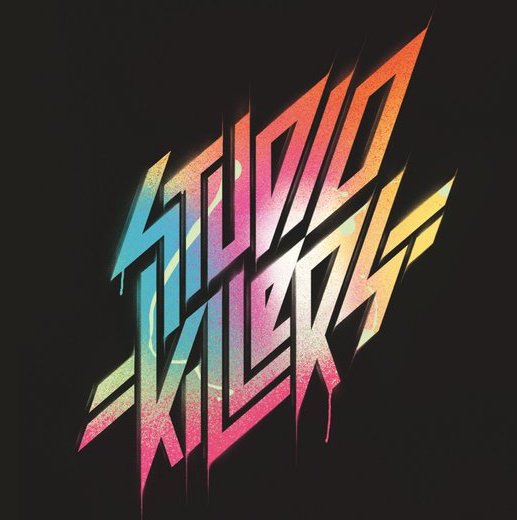 Studio Killers. No one knows where they came from; one day they were just here staring back at us through our high definition flat screens. 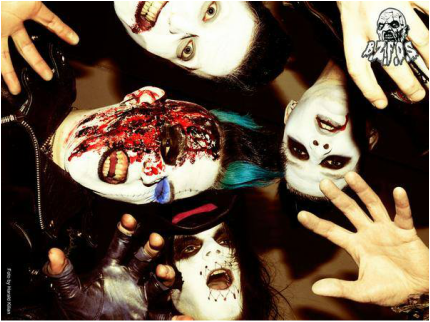 B-Movie Creatures – that´s what we are…“

Drummer & Singer Dead “Richy” Gein, Mr. „Jim“ Evilize on guitar, Dr. „He-Mann“ Schreck on doublebass and Reverend Bloodbath on Guitar and Keyboard, a lot of Horror cliches and bloodthirstiness, but always with a smile that means everything, are the typical character of the Bloodsucking Zombies From Outer Space.

After innumerous concerts and extensive tours throughout the whole continent the Bloodsucking Zombies From Outer Space have been an integral part of the european Horrorpunk- and Psychobilly-scene since a long time and also fans from all heavy-genres follow this four Horrorbillys!
In 2012 they celebrate their 10th anniversary louder and faster than before!
They played on scene-festivals like Satanic Stomp, Wave Gothic Treffen or Spirit Festival in Germany beside to big festivals like Mighty Sounds (CZ), Donauinselfest (Vienna), Pfingstspektakel (Austria), played two headliner tours through Germany and are part of the famous Hellnights-Tour!
Also released the strong selling best-of album ‘Decade of Decay – Gravest Hits of BZFOS’ (Schlitzer-Pepi Records/ Brokensilence).

In February 2014 they released their 4th album:
‘Toxic Terror Track – Music for the Postapocalypse’
and the brandnew musicvideo ‘Radio Active’, directed and produced by Martin Faltermaier (‘Zombies from outer Space’, ‘The Last Days of Humanity’, ‘In the Name of Gore’’)!
www.zombies.at 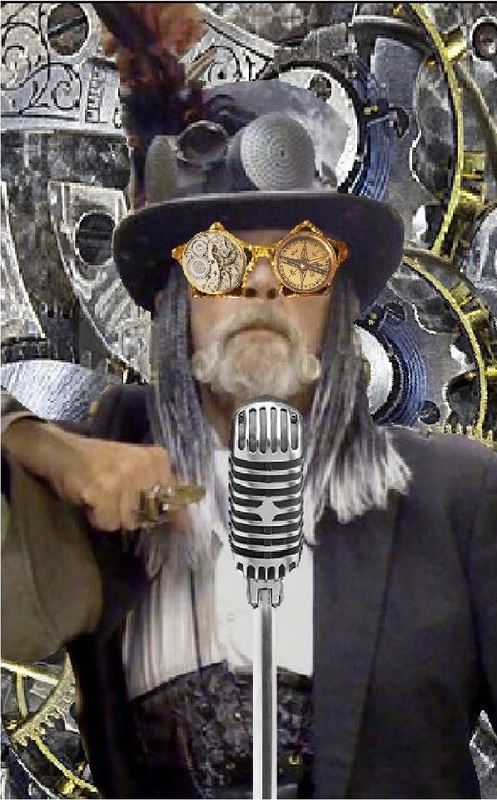